Mark van Doesburgh and Dirk Elsen have been part of NpM’s Board, with Mark as Chairman since 2017. In April 2021, NpM will join forces with Stichting NAB, the Netherlands Advisory Board for impact investing. As a result of this, both Mark and Dirk will step down. In this short interview, they reflect on the past years in NpM and look ahead to the future. 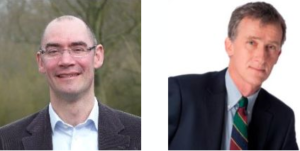 1. As Board Chairman, can you describe how you experienced these past few years at NpM?

Mark: ‘’I was very pleased to see that NpM and its members stepped up their efforts in the financial inclusion domain over the last few years. They did increasingly more, both in terms of investments and in terms of access-to-finance driven TA and advisory work, the latter of which was also facilitated in part by NpM. It underscores the prominent position the Netherlands has always played in the microfinance – nowadays the financial inclusion – domain furthering the finance frontier. In NpM, we transitioned from an outreach and event driven organisation into a much more project management and research driven organisation, with the SDGs becoming a leading theme. What always stood out was the outreach, networking and linking-pin function of NpM: sharing knowledge and working together with members and partners to do things which otherwise would not have happened.’’

2. What do you think the lasting legacy of NpM will be?

Dirk: ‘’I sincerely hope that the members and partners of NpM will continue working together in the areas we as NpM explored jointly with them, such as off grid solar, digital agriculture and rural finance and also continue to develop new relevant themes. Creating these linkages between members and partners shows that making a difference for the underserved is much easier by working together. That spirit, which has been promoted in an excellent way by the NpM team, should remain.’’

3. With NpM and Stichting NAB joining forces, what would you wish they achieve over the next few years?

Mark: ‘’The broadening of the spectrum for NpM members to “impact investing” is a logical next step, because the achievement of the SDGs in 2030 is the overarching  goal. The public and private sector have a critical role to play to substantially increase impact investments in the next few years to reach the SDGs. In the same vein as NpM, the new venture could facilitate investment flows by advocacy work, networking, sharing knowledge and creating markets. Bringing together Dutch investors that share a desire for impact investing, from NGOs to institutional investors, should create a strong momentum. I would wish the Netherlands becomes the leading impact investment hub in the world, with the new foundation carrying the flag.’’

Dirk: ‘’We would like to express our sincere gratitude to NpM’s staff and all members, donors and partners of NpM for the way they have supported NpM and the work we did together over all these years. It has been a rewarding journey, not in the least made possible by the continuing support of the Ministry of Foreign Affairs. Let’s move on and work hard to achieve the SDG’s in 2030!’’