Financial services play a key role in reducing adversities for 1.4 million refugees that Uganda hosts. Accessibility to formal financial services is still an obstacle faced by many refugees. To increase access, the Rural Finance Initiative (RUFI), opened its doors on February 11th, 2019 in Adjumani District in the Northern part of Uganda, where over five refugee settlements are located. The branch formally began operations with four staff members – two of whom are refugees and two from the host community. 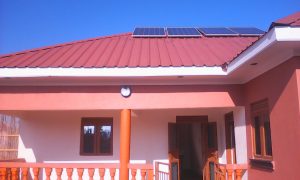 RUFI is a cross-border microfinance institution (MFI) that has been operating in South Sudan since 2008. RUFI moved with its clients to Uganda in 2017, since 90% of its clients had to flee from South Sudan after a crisis erupted in the area. They extend financial services such as loans, savings, mobile money and transfers to refugees and host communities in and around refugee settlements.

Last year, RUFI joined the Finance for Refugees trajectory of NpM, Platform for Inclusive Finance (NpM) to explore opportunities to reach more refugees. The new branch is supported by NpM with funding from the Church of Sweden. “Thanks to the intervention of the Church of Sweden, RUFI can now provide financial services to more refugees and the surrounding host community” adds Yengi Lokule, CEO of RUFI. With the efforts of RUFI and the support of Church of Sweden, new opportunities have opened up for refugees in Northern Uganda – thus creating employability and improving lives of refugees.

“One of the objectives of the Church of Sweden country programme in Uganda is to support refugees and host communities to reduce their vulnerability and build their resilience,” says Nadja Berger, Programme Officer for Uganda at the International Department of the Church of Sweden. “We see financial inclusion as fundamental to reducing poverty and enhancing self-reliance – through promoting NpM’s efforts in financial inclusion and funding the opening of a branch of RUFI in Adjumani we wish to contribute to improved access to essential financial services for refugees in northern Uganda”.

Refugees show widespread eagerness to start and grow businesses, and they need similar financial services as Ugandans. Resi Janssen, Senior Investment Manager at Cordaid, which is an investor of RUFI, adds: “Refugees often start the same type of business as they had in their home country. I visited various entrepreneurs in Bidibidi and Morobi camps, some of them already having expansion plans in mind: tailors, hair-dressers, tomato farmers, a pharmacy, motor-cycle taxi’s, piggeries”. They need access to financial services to realize these ideas.

As part of NpM’s Finance for Refugees trajectory – NpM conducted a diagnostic study in Uganda during May-August 2018 where 4 MFIs were analyzed, of which one was RUFI. This resulted in four concrete action plans detailing institutional changes that MFI’s needed to make, to be able to serve refugees. RUFI’s opening of a new branch is one of the first implemented actions as part of these action plans.

NpM, Platform for Inclusive Finance, is the leading national platform in inclusive finance sector worldwide. Established in 2003, the platform brings together Dutch development organisations, social investors and commercial banks active in the inclusive finance sector. Together with the Dutch Ministry of Foreign Affairs, NpM’s 13 members share a commitment to expanding access to finance in underserved regions and to anticipate the changing need in the sector to grow towards a responsible industry. The members of NpM are active in over 97 countries and have committed over EUR 4 billion to the inclusive finance sector. NpM’s activities are directed to the contribution of the financial sector in reaching the Sustainable Development Goals.